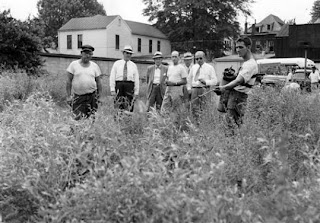 In this summer, 1952, photo hemp plants growing wild on a lot in downtown Louisville, Ky., are killed with chemical spray. Efforts to restore the crop that decades ago was a major industry in Kentucky appear to be growing despite the defeat of another legalization effort in the state’s 2012 General Assembly. The tall, leafy plant was outlawed because of its similarity to marijuana, but supporters argue it’s nearly impossible to get high by smoking hemp. (AP Photo/Louisville Courier-Journal)

LEXINGTON, Ky.—Hemp isn’t legal in Kentucky yet, but the eclectic mix of people at the Kentucky Hemp Coalition Seminar in Lexington was evidence that support for the versatile plant may be taking root.

One by one, elected officials stepped forward to promote the virtues of hemp production, staking out a position that once might have sown political trouble back home. They were cheered by liberals and libertarian-leaning conservatives alike. 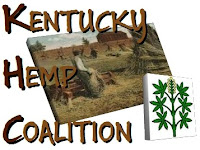 “We’ve come a long way,” said state Sen. Joey Pendleton, who has sponsored a string of unsuccessful bills seeking to reintroduce hemp in the Bluegrass state. “The first year I had this, it was lonely.”

Kentucky once was a leading producer of industrial hemp, a tall, leafy plant with a multitude of uses that has been outlawed for decades because of its association with marijuana. Those seeking to legalize the plant argue that the change would create a new crop for farmers, replacing a hemp supply now imported from Canada and other countries.

The plant can be used to make paper, biofuels, clothing, lotions and other products.

Despite bipartisan support, the latest hemp measures failed again this year in the Kentucky General Assembly. But this time, hemp advocates think they have momentum on their side and vow to press on with their campaign to legalize the crop.

Pendleton, D-Hopkinsville, urged his fellow hemp supporters to lobby hard in preparation for another push in 2013.

“I think next year is the year,” said Pendleton, whose grandfather raised hemp in western Kentucky.

Hemp bills have been introduced in 11 state legislatures this year, but so far none have passed, according to the National Conference of State Legislatures. The bills include allowing privately funded industrial hemp research, allowing hemp production under strict licensing programs and urging the federal government to allow hemp  production for industrial uses.

Hemp’s reputation has undergone drastic pendulum swings in the U.S.

During World War II, the U.S. government encouraged farmers to grow hemp for the war effort because other industrial fibers, often imported from overseas, were in short supply. But the crop hasn’t been grown in the U.S. since the 1950s as the federal government moved to classify hemp as a controlled substance because it’s related to marijuana.

Someone would have to “smoke a joint the size of a telephone pole,” to get high from hemp, Roger Johnson, a hemp supporter and president of the National Farmers Union, said in a telephone interview.

Johnson has seen strong support for hemp in North Dakota, where he formerly served as state agriculture commissioner.

Two North Dakota farmers received the state’s first licenses to grow industrial hemp in 2007, but they never received approval from the U.S. Drug Enforcement Administration. The farmers sued, but a federal appeals court affirmed a lower court decision dismissing the suit “There’s no amount of talking, and believe me I’ve tried, that might convince them otherwise,” Johnson said of the DEA. “So short of the Congress passing a law defining industrial hemp differently from marijuana, I think it’s going to be a long, uphill battle to get anywhere.”

The federal Controlled Substances Act does not differentiate between marijuana and hemp, said Barbara Carreno, a DEA spokeswoman. As a result, “we would not approve applications to grow hemp because it is marijuana,” she said.

Because of that, Johnson called for a grassroots push for congressional action to legalize hemp production.

Pete Ashman, of Philadelphia, was among those at the Lexington hemp seminar, where he displayed a myriad of hemp products, from food, to toilet paper to shampoo. He claimed, “There’s nothing greener on God’s earth.”

Republican state Sen. Paul Hornback didn’t go that far, but the tobacco farmer from Shelbyville said in a phone interview that he sees industrial hemp as an alternative crop that could give Kentucky agriculture a boost if it ever gains a legal foothold.

Agriculture Commissioner James Comer also supports legalization, arguing that industrial hemp could yield more per acre than corn and soybeans. He sees hemp as a viable alternative to tobacco, a once-stalwart crop that has been on the decline in Kentucky.

Comer, among the speakers at the Lexington seminar, said most Kentucky farmers have the equipment needed to produce hemp. He added that the crop needs no herbicides or pesticides, a plus for the environment and a cost savings for producers.

Once factories started churning out hemp products, farmers would flock to the crop, Comer predicted.

Comer, a Republican, said he’s been contacted by three “very legitimate industrial prospects” that would consider opening hemp production plants in Kentucky if the crop becomes legal to grow. One company wants to use hemp to make vehicle dashes, he said. Another wants to make ethanol, the other cosmetics out of hemp, he said.

John Riley, a former magistrate in Spencer County, sees hemp as a potentially lucrative crop that could become a renewable fuel source. It would be a big transformation for a crop once known as a major source for rope.

Still, the crop needs to overcome what Riley refers to as the “snicker factor.”

“I look forward to continuing to fight the fight,” Pendleton said. “We can make this happen in Kentucky.”

Posted by David Hadland at 6:07 AM