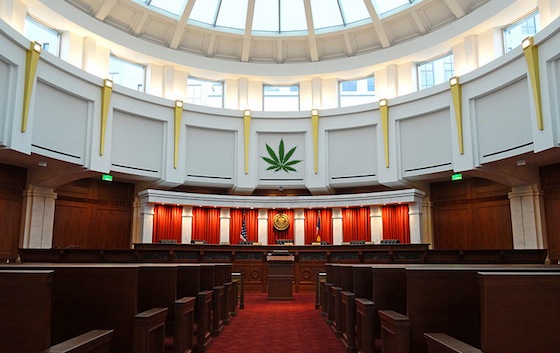 The third day of hearings on the constitutionality of cannabis’ federal Schedule I status presented further bizarre twists, as both federal prosecutors and NORML’s defense team appeared at times to agree on the medical benefits of cannabis.

In one early incident, Assistant US Attorney Richard Bender, in continued cross-examination of Dr. Philip Denney, failed to rebut Denney’s testimony that plant-based cannabis effectively treated chronic pain. Instead, Bender attempted to show a marginal benefit to using dronabinol (AKA Marinol, which is synthetic THC taken orally in pill form) compared to cannabis and at one point seemed to get a little carried away with his line of questioning. Directing Denney’s attention to the results of a study which showed that both cannabis and Marinol proved effective in treating chronic pain but that the effects of Marinol lasted longer, Bender asked, “So, both smoked marijuana and oral THC were effective, but Marinol was a little better because it lasted longer?”

Denney answered yes, and Bender continued, apparently unaware that he had just admitted that cannabis has medical value.

Later in the same cross-examination Bender slipped again, making a similar admission in a more humorous way. Asking Denney about research showing the ability of cannabinoids to protect brain cells from damage during traumatic injuries, Bender asked, in a somewhat mocking tone, “So, if you’re going to have a traumatic brain injury, you’d better do it under the influence of marijuana?” Denney responded with an emphatic “yes,” provoking laughter in the courtroom.

But perhaps the greatest damage to the government’s case came as a result of an apparent lapse of attention on the part of the prosecution. NORML attorney Zenia Gilg managed to elicit numerous responses from Denney on the nature of the US government’s Investigative New Drug (IND) program, under which US patients receive free tins of government-grown cannabis every month to treat severe illnesses, before Bender seemed to stir, stand and state a valid objection.

It was apparently too late. Calling the objection “belated,” Judge Kimberly Mueller overruled it.

This blunder proved crippling for the prosecution, as Gilg was then able to elicit further testimony from Denney about the IND program, and in particular the results of a study conducted by Dr. Ethan Russo and others in 2002 which showed remarkable long-term success treating severely ill patients who had proven resistant to traditional therapies, and with a minimum of undesirable side effects – all at the behest of the US government.

Because the hearing also concerns the question of whether the medical use of cannabis is “currently accepted” in the US, Denney also testified regarding polls conducted of physicians about their professional opinions of cannabis. While Bender quibbled over details of a poll by the prestigious New England Journal of Medicine showing 76% approval of a medical marijuana recommendation in a hypothetical patient, he left entirely uncontested testimony about another physician poll conducted by WebMD which showed 69% support for the medical use of cannabis – again apparently conceding a point which is logically central to the question of whether cannabis belongs in Schedule I.

Leaf co-founder Chris Conrad also took the stand as an expert witness, cross-examined by prosecutor Samuel Wong, who attempted to contradict the notions that cannabis had a known and reproducible chemistry and that it could be subjected to quality controls. Evoking the use of pesticides and other chemicals, Wong tried to suggest that use of such chemicals would lead to cannabis patients inhaling toxic substances. But Conrad pointed out that that was not necessarily the case, as many such sprays were designed to break down over time. Wong erred even worse when he tried to imply that quality control standards for cannabis didn’t exist, which opened the door for Conrad to introduce the medical cannabis quality control standards recommended by the American Herbal Pharmacopeia.

Still, it was ultimately Dr. Denney who most succinctly summarized the tenor of the day. “I am perplexed,” he testified, “as to why there’s even a debate. Cannabis does have medical value.”