Colorado hemp farmers and entrepreneurs spent this past growing season experimenting with cultivars to find the ideal plant for our state’s high and dry growing conditions.

But hemp is making inroads even in states where marijuana legalization has yet to gain momentum. 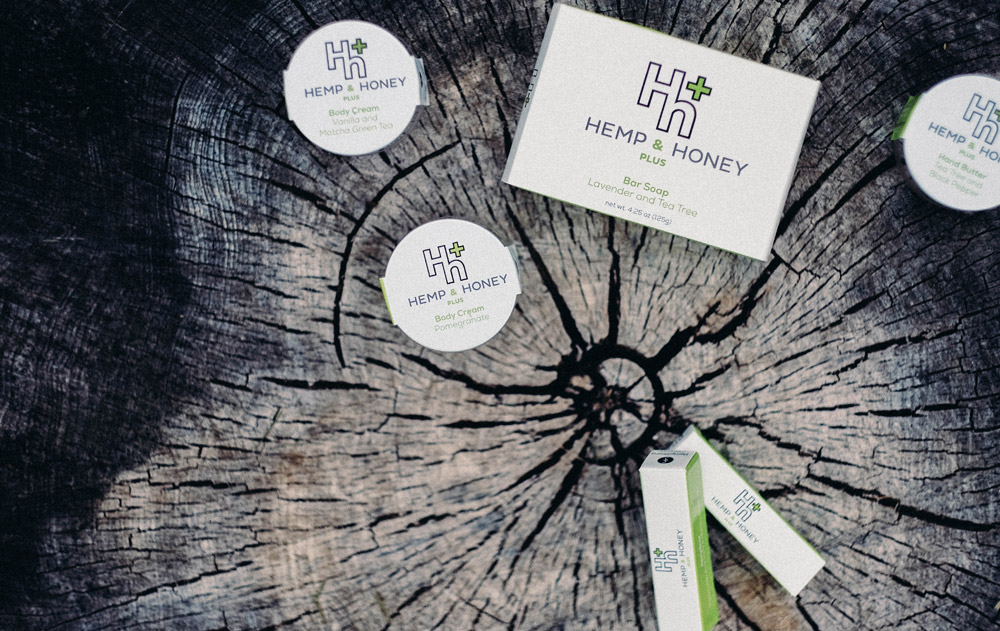 Above:  Some of the products offered in the Hemp & Honey Plus line created by Scott Sondles and Michael Bumgarner. (Provided by HempStrong Brands)

Consider HempStrong Brands, a grassroots business initiative started in Kentucky and Ohio by two entrepreneurial cousins with little connection to the legalization debate. Their long-term goal, which began with the pampering skincare line Hemp & Honey Plus, is to create local, sustainable hemp business opportunities.

Kentucky was once the country’s leading hemp producing state, according to the Kentucky Department of Agriculture. Now Kentucky is one of 10 states named in the 2014 Farm Bill, which relaxes federal drug laws to make way for renewed hemp cultivation.

Ohio also was one of the country’s busier hemp-growing states before the crop became illegal as part of the 1970 Controlled Substances Act.

Hemp & Honey Plus currently sources its hemp seed oil from Canada, which reported nearly 39,000 acres of industrial hemp in 2011 and is estimated to export more than $10 million of hemp annually.

• The Cannabist: How did two all-American guys such as yourselves develop an interest in hemp?

Scott Sondles: In college (at the University of Kentucky in Lexington), I had a custom clothing company. We sold T-shirts to bars. A customer came to me and asked about hemp clothing. Like most people, I didn’t know (about) hemp, but once I found out about the textiles and the seeds and oil and all of the benefits of hemp, I was hooked.

Michael Bumgarner: There are a lot of small farmers here in Ohio who would love to find alternative commodities to grow that are easy and require less input than corn. With hemp, that became an objective of ours. We want to lead the way in the Midwest, educating people and encouraging common-sense legislation to cultivate industrial hemp. We feel like there’s an opportunity with hemp to create jobs and improve the economy. If Ohio legalizes industrial hemp, we could put some small farmers back to work while improving the environment and offering healthy lifestyle products to the consumer.

• The Cannabist: Particularly with the snowballing national push toward some form of cannabis legalization, there may be an abundance of entrepreneurs pushing into hemp. What sets HempStrong Brands apart from other like-minded entrepreneurial efforts?

SS: The reason we started HempStrong Brands was to work with all these new hemp entrepreneurs. We don’t think of it as a negative that more people are getting into this marketplace. It’s a benefit.

MB: We are really trying to work this issue at the local level. For instance, I’m an Ohio Farm Bureau member, so I’m trying to get more involved with farmers. … So many hemp business leaders are West Coast-based. We are uniquely situated in the Midwest, at the heart of American farming.

Hemp farming: Coverage of the re-emergence of industrial hemp in the United States as federal laws loosen

• The Cannabist: What is your personal outlook for hemp in America in the years to come?

SS: We believe that it’s hemp seed that’s really going to push the hemp industry forward in the short term. A hemp fiber industry will come along after that.

• The Cannabist: Hemp & Honey Plus was the first strategic partnership for HempStrong Brands. What’s next?

MB: We’ll launch our next HempStrong Brand during the first quarter of 2015. It complements our skincare line. We’re also launching a nonprofit organization that complements all of our brands. We will be donating a portion of our revenue to fight hunger and encourage healthy eating.

• The Cannabist: Canada is currently the source for the hemp seed oil that goes into Hemp & Honey Plus products. When do you expect to start working with an American hemp producer?

MB: We’re coming to Denver for the Indo Expo (cannabis-industry business convention Nov. 15-16). We have meetings already in place (with American hemp producers). … As soon as the hemp supply meets our demand, we definitely want to source our materials from American companies.

CONTINUE READING AT “THE CANNABIST”…