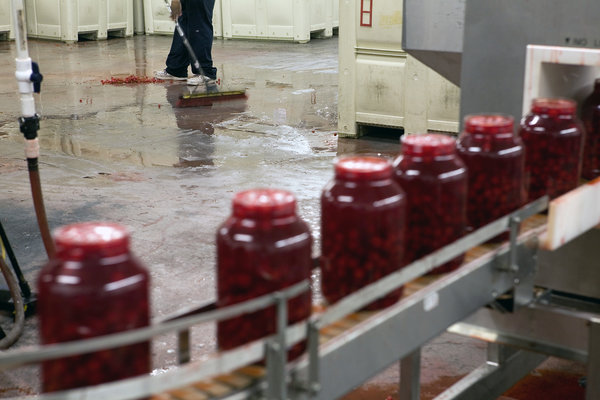 Arthur Mondella’s alternate life was buried behind a roll-down gate, behind a fleet of fancy cars, behind a pair of closet doors, behind a set of button-controlled steel shelves, behind a fake wall and down a ladder in a hole in a bare concrete floor.

Here, in a weathered basement below the Red Hook, Brooklyn, maraschino cherry factory he had inherited from his father and his grandfather, he nurtured a marijuana farm that could hold as many as 1,200 plants at a time. Here, below the office where he served as chief of Dell’s Maraschino Cherries Company, he kept a small, dusty library and a corkboard pinned with notes. Most of the books dealt with plant propagation methods. One did not: the “World Encyclopedia of Organized Crime.”

Much about the hidden operations of Mr. Mondella, 57, who shot and killed himself on Tuesday as investigators found his marijuana plants, remains frustratingly out of reach for his family and friends. Investigators do not know how he distributed the marijuana, how long he had grown it or who helped him. Most baffling of all are Mr. Mondella’s reasons for hiding his operation under a business that was, by all accounts, healthy and growing — and for taking his life so suddenly when he was caught.

On Thursday, the day of Mr. Mondella’s private wake, the company said the cherry business would go on. Major restaurant chains that bought Dell’s cherries, including Red Lobster and T.G.I. Friday’s, said their menus would be unaffected. But at the offices of the Brooklyn district attorney, Kenneth P. Thompson, the focus was on untangling what part of the business was cherries, and what part was marijuana, at the red-brick factory on Dikeman Street.

“We’re looking at the actual connections between marijuana and the factory and whether or not some portion of the cherry business there really was an effort to mask the marijuana operation,” said a law enforcement official close to the investigation, who asked not to be identified because the inquiry is continuing.

Given the thick scent of cherry processing and the large amount of electricity the factory would naturally consume, the official said, “it’s a very convenient place to be” to mask both the odor and the power needed to cultivate the marijuana plants.

Yet because the basement labyrinth was so well concealed, it seemed plausible that the cherry factory’s regular employees were unaware of their boss’s secret. Mr. Mondella may have been the only person with access to the garage where he kept several luxury vehicles and the entrance to the basement, the official said.

Still, the scope of the operation made it unlikely that Mr. Mondella was the only person involved. Spanning about 2,500 square feet, the underground complex included an office, a large grow room, a storage area, a freezer for the harvested plants and an elevator. A network of 120 high-end growing lamps shined on the plants with intensities that varied depending on each plant’s size; an irrigation system watered them. Investigators recovered about 60 types of marijuana seeds.

The investigators had never seen a larger operation in New York City, the official said.

“The way you have to set that up, there’s got to be plumbers and electricians working off the books who are very sophisticated,” he said, “and it wasn’t Arthur Mondella, as far as we know, that had that kind of skills.”

Investigators first received a tip about Mr. Mondella and illegal drugs about five years ago, he said, but nothing came of it then.

As part of a separate investigation into allegations that Dell’s was polluting Red Hook’s water supply, the district attorney and the city’s Department of Environmental Protection decided to search the factory for files on environmental infractions. It was during that search on Tuesday that they stumbled on the marijuana operation. (The pollution investigation is still active.)

The drug inquiry is still in its early stages. But the official said investigators were looking closely at whether the operation had ties to organized crime. Mr. Mondella would have required help to maintain the farm and distribute his product, the thinking goes, and an organized crime syndicate could have provided it.

To Mr. Mondella’s family and friends, the revelations about his hidden operations have been “aberrant and shocking,” Michael Farkas, the lawyer representing the Mondella family and the management of Dell’s, said in an interview.

The company was considered among the largest producers of the cherries in the country. Although many cherry suppliers were disappearing around the time that Mr. Mondella took over the business in 1983, the market appears stable now, thanks in part to maraschino cherries’ popularity abroad, said Robert McGorrin, the chairman of the food science department at Oregon State University, where the current method of processing the cherries in brine, rather than alcohol, was developed in the 1920s.

Law enforcement officials are just as perplexed about Mr. Mondella’s motives. Though investigators are sorting through a substantial bounty of evidence, they have no hope of gaining access to the data on Mr. Mondella’s iPhone 6, which, like other new-model iPhones, is encrypted with a user-created code that even Apple says it cannot unlock.

“No one seems to have had any clue that this was going on, and there certainly didn’t seem to be any strange or traumatic circumstances that would’ve explained this,” Mr. Farkas said. “The business was not doing poorly; the business was doing very well. We were unaware of any major problems in Arthur’s life. Somebody knows — but we’re all waiting for answers here.”

Correction: February 26, 2015
An earlier version of this article misstated the size of the underground complex where marijuana was grown. It was 2,500 square feet, not 250.

A version of this article appears in print on February 27, 2015, on page A20 of the New York edition with the headline: Secret Life and Business Surface, Along With Many Questions.