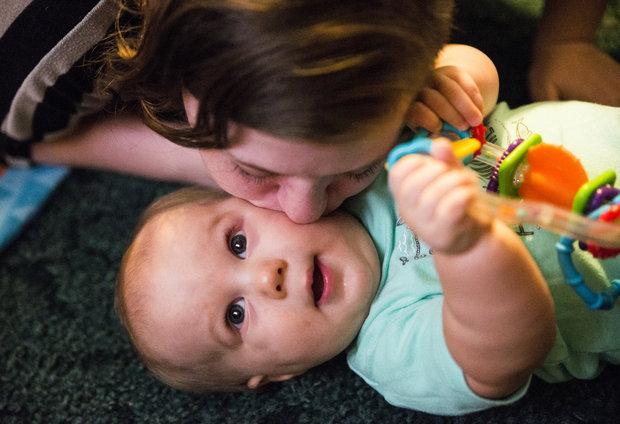 Will Bishop has suffered no health effects from his mother’s self medication of her epilepsy with marijuana while she carried him. (Grant Blankenship)

The family of a young Russell County woman facing up to ten years in prison after using marijuana to treat seizures while pregnant has started a crowdfunding campaign to raise funds for her criminal defense.

Katie Darovitz shared her story with ProPublica and Al.com earlier this year. The 25-year-old suffers from epilepsy so severe that she can’t drive safely or hold a job. When she found out she was pregnant, she went off her anti-epilepsy drugs – which have been linked to birth defects – and began using marijuana to prevent seizures.

She was arrested a couple weeks after the December 2014 birth of her son because they both tested positive for marijuana. Alabama is one of a handful of states where mothers can be prosecuted for exposing an unborn child to illicit drugs under the state’s chemical endangerment of a child law.

In an analysis of almost 500 criminal cases, Al.com and ProPublica discovered that marijuana was the drug most commonly cited in indictments and arrest reports for women arrested for drug use during pregnancy. Darovitz faces several years in prison if convicted.

The family is seeking up to $15,000 to pay for legal expenses and has started a GoFundMe campaign.

Darovitz’s mother-in-law, Debi Word, has reached out to local attorneys. At least one attorney did not want to take the case to trial and urged Darovitz to take a plea deal. But that deal would saddle Darovitz with substantial monthly court fees, Word said.

"This is such an injustice," Word said. "And I can’t imagine her going to prison for trying to protect her baby."

The case has already taken a toll of Darovitz’s health, Word said. Stress has caused her seizures to intensify, and marijuana is the only treatment that is keeping them under control, Word said. If Darovitz entered a drug treatment court, she wouldn’t be able to use marijuana to treat seizures because medical marijuana is not legal in Alabama.

Darovitz has struggled with anxiety and depression throughout her legal ordeal. Although she faces up to ten years if convicted, the family believes a jury will not convict if they hear Darovitz’s story. Expert witnesses who have researched the use of marijuana during pregnancy have also agreed to testify. Studies of children exposed to marijuana in utero have produced mixed results, with some showing no effects on development and others suggesting some increase in attention deficit and hyperactivity disorders.

"This has been very stressful and I hope it just goes away, because all I was doing was trying to protect my son and keep myself alive," Darovtiz said. "And I really hope I can see my son’s first birthday."