We must defend the victory at Standing Rock 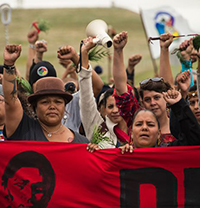 Indigenous water protectors last month secured a major win for Standing Rock. Your actions helped. The Army Corps of Engineers was convinced to halt the Dakota Access Pipeline and conduct an Environmental Impact Statement review.
We need to stand with Standing Rock to ensure that the environmental review won’t be stopped by President-elect Trump.
Progress on the pipeline review is stalled. Although it’s been over a month, the Army Corps of Engineers hasn’t started the review yet. This review is a crucial step in ensuring that the government hears the Standing Rock Sioux Tribe’s concerns about the pipeline. If the review doesn’t start before President-elect Trump takes office, it could be easier for him to scrap it and ram through completion of the pipeline.
We can’t leave the Dakota Access Pipeline in Trump’s hands: call the Army Corps comment line right now and ask them to start the Environmental Impact Statement review immediately, before January 20th.
President-elect Trump has vowed to fast track the construction of pipelines within his first 100 days in office. We can’t let him ignore the serious human rights issues at play with the Dakota Access Pipeline.
I’ve been to Standing Rock and have spoken with the communities whose land, water and cultural sites are at stake. I’m worried for what might happen under a Trump Administration and what this might mean for the lives of the Standing Rock Sioux Tribe and others that could be affected.
Make the call to the Army Corps right now. It’s easy, quick and can make a real impact. We’ll give you the number and a script for what to say.
The U.S. government must acknowledge that Indigenous people have the right to be involved in decisions that could impact their human rights.
Thank you for taking action.
Sincerely,
Zeke
Zeke Johnson
Individuals at Risk Program
Amnesty International USA