TRENTON — A jury on Thursday found Ed “NJ Weedman” Forchion not guilty of the more serious witness tampering crime he was charged with, and was hung on a second count of the same charge.

The marijuana advocate was visibly excited with the outcome.

Once the jury had cleared the court, Forchion raised his hands in victory before making an oral motion to Mercer County Judge Anthony Massi to re-open his detention hearing.

(He remains jailed; Massi noted the oral request, but said it needed to be properly filed.)

As the jury was leaving the courtroom, Forchion leaned down into the microphone and thanked them.

Late Thursday, in a call from the Mercer County jail, Forchion said: “To all the jurors, thank you!”

“I have always believed in the jury system, and in this case it worked out. I’m happy as hell,” he said.

In court, clad in a red and black suit, Forchion had given supporters sitting behind him a quick thumbs up before the jury entered the courtroom. Moments later, they found him not guilty of a second-degree witness tampering charge, and was hung on a third-degree count of the same charge.

Neither Mercer County assistant prosecutors who tried the case, Stephanie Katz or John Boyle, commented on the outcome, saying the matter was still pending. 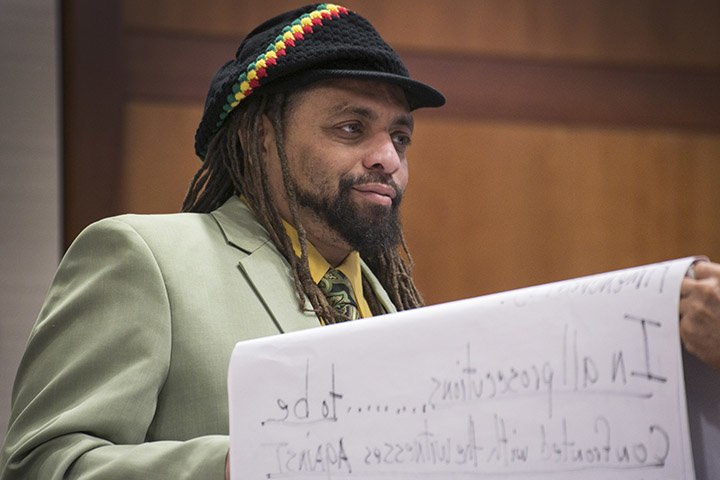 NJ Weedman on trial: Everything you need to know

He’s been in jail since March, but Ed Forchion is still making news

Prosecutors allege the marijuana right advocate publicly outed the witness who he believes informed on him to authorities in the investigation that led to the 2016 drug raid of his Trenton restaurant.

The prosecutor’s office now has 120 days to re-try Forchion, or dismiss the charge. A status conference date will be set to discuss the future of the case, .

In the Thursday night call, Forchion reiterated his stance that there will be no plea bargains, and if the Mercer County Prosecutor’s Office wants to try him again, he’s ready for round two.

After the verdicts, a group of his supporters were initially happy when the jury ruled that Forchion was not guilty on the one count, but became frustrated when they learned he would not be released from jail.

“That’s not what he’s guilty of,” Debi Madeo, Forchion’s fiance, said outside the courtroom, “he’s guilty of being an asshole.”

Madeo said she’s worried Forchion will remain in jail for several more months, until a new trial can begin. She then echoed statements Forchion has made in the past about not receiving a fair trial.

During the trial, prosecutors argued that Forchion badgered the witness online and sent mail to his neighbors.

Forchion testified that he was an “ass,” and he posted on social media a lot, but he did not believe what he was doing was illegal, and prosecutor’s were pursuing a “fake case.”

UPDATE: Not guilty on 2nd degree

❗️
another 120 days in jail for another trial

CONTINUE READING AND TO SOURCE LINK!