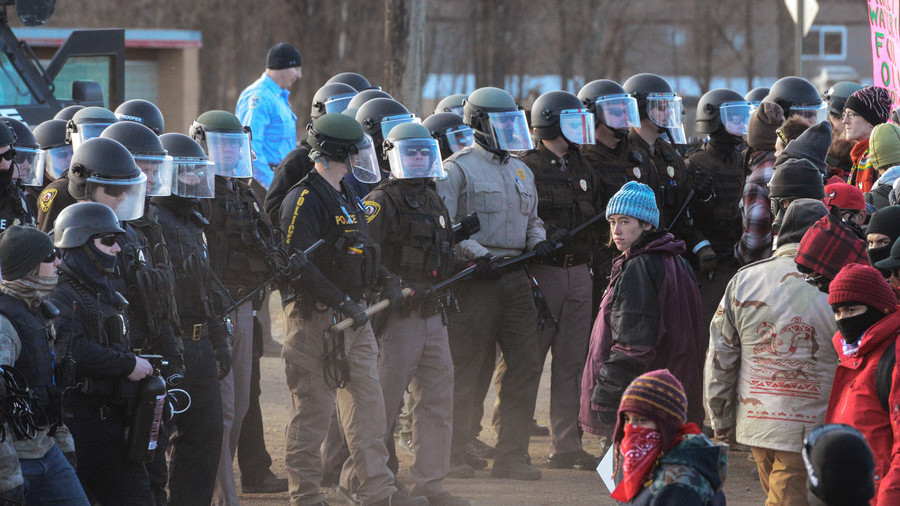 New laws introducing harsher penalties against protesters who target “critical infrastructure” such as oil and gas pipelines are now pending in half a dozen states in the US.

The legislation is aimed at deterring protests similar to the one that delayed operations at the Dakota Access Pipeline (DAPL) at the Standing Rock Indian Reservation in North Dakota in 2016.

Bills have been ushered through state legislatures in Minnesota and Louisiana, states that host parts of the Bakken system, a underground network of pipelines which includes the DAPL and the Energy Transfer Crude Oil system which links oil fields in North Dakota and the Mexican Gulf Coast. The laws ban protesters from trespassing into territories through which “critical” oil and gas pipelines run.

Legislation recently introduced in Minnesota carries a penalty of up to one year in prison for those found guilty of recruiting, training, aiding, advising, or conspiring with trespassers. The penalty can be increased to 10 years if the trespasser intends to “substantially disrupt” the facility.

Critics worry that the wording could be applied to peaceful protests blocking access to all kinds of infrastructure. The International Center for Not-for-Profit Law warned that, under the Minnesota law, critical infrastructure could include bus stations and bridges – effectively giving authorities carte blanche to crack down on peaceful protesters.

In Louisiana, lawmakers went further. According to a bill passed in the state’s legislature this week, people trespassing in territory containing critical infrastructure could face up to five years in prison. If it is thought the intention is to commit criminal damage, trespassers could face as many as 20 years.

The legislation also significantly broadens the definition of “critical infrastructure” to include pipelines as well as “any site where the construction or improvement of any facility or structure.” As a result, any protester could be sent to prison for simply taking part in a rally at a pipeline construction site.

The Minnesota and Louisiana proposals are far from isolated cases. Oklahoma planned to introduce huge fines for protesters in a bill adopted in May 2017. Similar legislation was introduced by Iowa, Ohio and Pennsylvania as well as Wyoming.

The Ohio and Pennsylvania bills are pending while Iowa passed its law in April. In Wyoming, the bill passed the legislature before being vetoed by the state’s governor.

The $3.8 billion DAPL is a 1,172 mile (1,866 km) underground pipeline, built to carry oil from the Bakken shale oil fields in North Dakota to the oil tank farm in Illinois. In 2016, a number of Native American tribes in the North and South Dakota opposed the pipeline construction, arguing it would threaten their sacred burial grounds as well as their sources of freshwater.

Beginning in April 2016, the Standing Rock Sioux Tribe set up a protest encampment near Lake Oahe on the Missouri River. Over the course of the summer the camp grew to thousands of people. At some point, Energy Transfer Partners (ETP), the corporation behind the Dakota Access Pipeline, bulldozed a section of the land that the Standing Rock documented as a historic, sacred burial site. The move forced the protesters to enter the area, where they were attacked by private security workers, who used attack dogs and tear gas.

In late October, the National Guard and police with riot gear and military equipment cleared the encampment over claims the area wasn’t safe because of winter temperatures. The construction that was temporally suspended by the Obama administration was eventually greenlighted by Donald Trump.

The protesters were also subsequently sued by the ETP that accused them of being “eco-terrorists.” In the meantime, a private security firm hired by the ETP to provide security consulting for the DAPL project, which was accused of sweeping and invasive surveillance of protesters, is seeking the settlement for the accusations. It is ready to pay fines as long as it does not have to admit any wrongdoing.

“The reason they are doing it is that they are worried about the fact that all this information that they gathered becomes useless in subsequent lawsuits that would follow,” Mike Papantonio, an American attorney and a TV presenter, who hosts the “America’s Lawyer” show on RT America, said, commenting on the issue.

“What the company is likely to do here is just to protect information that they illegally gathered,” he said, adding that this firm “did a lot of [things] wrong,” and a series of lawsuits against it could still “become very significant.”

CONTINUE READING AND TO VIDEO!