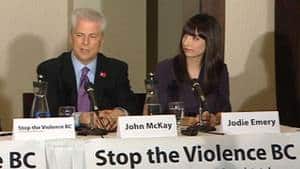 The former U.S. district attorney who prosecuted B.C. marijuana activist Marc Emery in a cross-border sting is calling for the legalization and taxation of pot in Canada and the U.S.

John McKay, a former U.S. attorney for the western district of Washington State, was joined by Emery’s wife Jodie and former B.C. Attorney General Geoff Plant at a lecture in Vancouver on Wednesday.

McKay said he did not regret prosecuting Emery because he broke U.S. law, but he believes the war on pot has been a complete and total failure. He said the laws keeping pot illegal no longer serve any purpose, but allow gangs and cartels to generate billions in profits.

"I want to say this just as clearly and as forthrightly as I can, marijuana prohibition, criminal prohibition of marijuana is a complete failure," McKay said.

McKay said marijuana, like alcohol, should be produced and sold to adults by the government, and that would generate at least half a billion dollars in revenue annually in Washington State alone.

More importantly, he said, ending prohibition would end the violent reign of gangs and drug cartels who are profiting from the situation. He said any prohibition in society requires broad support from the population, and that isn’t the case with marijuana.

The appearance was organized by Stop the Violence BC, a coalition of high-profile academic, legal, law enforcement and health experts, which is working to reduce crime and public health problems stemming from the prohibition on marijuana.

McKay, a Republican, was a U.S. Attorney from 2001 to 2007, when he resigned or was fired along with eight other U.S attorneys by President Bush.

He is now a professor in the faculty of law at Seattle University and an avid supporter of the Washington State ballot initiative for the November election to implement a regulated, taxed market for marijuana.

Marc Emery remains in prison in the U.S., serving a five-year sentence for conspiracy to manufacture marijuana through his mail-order cannabis seed business.

James Higdon’s “The Cornbread Mafia: A Homegrown Syndicate’s Code of Silence and the Biggest Marijuana Bust in American History” Available This Week

NEW YORK, NY, Apr 16, 2012 (MARKETWIRE via COMTEX) — ATTENTION JOURNALISTS AND PRODUCERS: 4/20 — “The Pot Holiday” — is this week! James Higdon is the perfect choice for any conversation about marijuana legalization. Call now to schedule an interview.

In the summer of 1987, Johnny Boone set out to grow and harvest one of the greatest outdoor marijuana crops in modern times. In doing so, he set into motion a series of events that defined him and his associates as the largest homegrown marijuana syndicate in American history, also known as the Cornbread Mafia.

Author James Higdon — whose relationship with Johnny Boone, currently a federal fugitive, made him the first journalist subpoenaed under the Obama administration — takes readers back to the 1970s and ’80s and the clash between federal and local law enforcement and a band of Kentucky farmers with moonshine and pride in their bloodlines. By 1989 the task force assigned to take down men like Johnny Boone had arrested sixty-nine men and one woman from busts on twenty-nine farms in ten states, and seized two hundred tons of pot. Of the seventy individuals arrested, zero talked. How it all went down is a tale of Mafia-style storylines emanating from the Bluegrass State, and populated by Vietnam veterans and weed-loving characters caught up in Tarantino-level violence and heartbreaking altruism. This work of dogged investigative journalism and history is told by Higdon in action-packed, colorful and riveting detail.

“James Higdon has written a compelling, fast-moving saga about how a backwoods band of outlaws, begat by Kentucky moonshiners of the 1920s, took over the marijuana business in the Midwest and led the Feds on the biggest pot chase in American history.” –Bruce Porter, author of BLOW: How a Small-Town Boy Made $100 Million with the Medellin Cocaine Cartel and Lost It All

James Higdon has worked for the Courier-Journal in Louisville and the New York Times, contributed to The Prairie Home Companion, researched the NYPD counter-terrorism and intelligence divisions for the new CBS series NYC 22 (produced by Robert De Niro and Jane Rosenthal), and is currently a contributing editor with PBS Frontline’s Tehran Bureau.