LIMA, Peru — Colombia surpassed Peru last year in land under coca cultivation, with Peru experiencing a 14 per cent drop in acreage for the plant used to make cocaine, according to UN data released Wednesday.

The UN Office on Drugs and Crime’s annual report on Peruvian coca’s crop said it encompassed 42,900 hectares. It’s the crop’s fourth straight year of decline and the smallest area under cultivation since 1998.

The finding does not necessarily mean Colombia is now the world’s No. 1 cocaine producer, however. Much of Peru’s crop is more mature and higher yielding, having never been subjected to eradication.

Peru’s government does not destroy coca in the Apurimac, Ene and Mantaro river valley, the world’s leading coca-growing region, citing security concerns. The size of Belgium and Israel

combined, the valley accounts for 68 per cent of Peru’s coca crop.

Last year, Peruvian President Ollanta Humala suspended U.S.-backed plans to begin eradication there and replaced the Peruvian drug czar who was advocating it.

Peru’s drug czar, Alberto Otarola, said his government is not finished measuring potential cocaine production but estimated it at currently “no more than 270 tons.”

Two weeks ago, the UN said Colombia’s coca acreage skyrocketed in 2014 from 48,000 hectares to 69,000 hectares. That’s in large part because of reduced aerial spraying. The herbicide used, glyphosate, was recently classified by a UN health agency as a probable carcinogen.

“We are the Andean region country that has advanced most in reducing coca leaf,” Otarola told reporters. Peru destroyed 31,000 hectares of coca last year and has set the goal of destroying 35,000 hectares this year.

The policy provokes resistance from the tens of thousands of Peruvians who depend on coca for their livelihood.

On Tuesday, at least one person was killed and 25 people, including seven police officers, were injured in a clash between coca farmers and police in the Amazonian town of Constitution, local officials said. The farmers were protesting eradication and a lack of alternative development in the region.

One indicator of cocaine production is the amount of coca leaf harvested per country.

The vast majority of coca leaf grown in both countries is used to produce cocaine.

The UN and the U.S. both agree that Bolivia is the No. 3 cocaine-producing nation after Colombia and Peru. The White House put Bolivia’s estimated potential cocaine production at 210 metric tons, up from 145 metric tons in 2012.

Bolivia has become a major transit and refining country for Peruvian cocaine in recent years.

The U.S. ended counter-narcotics assistance to Bolivia in 2013, five years after its government expelled the U.S. Drug Enforcement Administration. 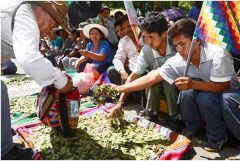