Yesterday, Tuesday February 7, the US Army Corps gave notice of intent to grant the final easement for the Dakota Access Pipeline to cross the Mni Sose (Missouri River).

They are skipping the Environmental Impact Study ordered in December, and skipping the congressional notification period required by law to push through a destructive, exploitative and illegal pipeline. We knew these attacks on frontline communities were coming and now more than ever we must #GrowTheResistance and take bold action. We stand united with Indigenous Peoples and water protectors. 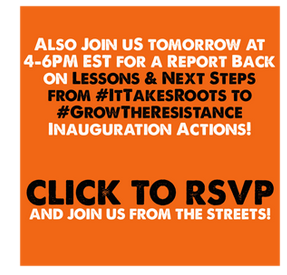 It Takes Roots (a formation of the Indigenous Environmental Network, Grassroots Global Justice Alliance, the Climate Justice Alliance and the Right To The City Alliance) is calling for all our member groups and communities to rise up TODAY FEBRUARY 8th in solidarity with the Indigenous Coalition at Standing Rock’s worldwide call for emergency actions “to disrupt business as usual and unleash a global intersectional resistance to fossil fuels and fascism.  Connect with other struggles.  Think long-term movement building.  We are in this for the long haul.”
Tom Goldtooth, Executive Director of the Indigenous Environmental Network, said
“Donald Trump will not build his Dakota Access Pipeline without a fight. The granting of an easement, without any environmental review or tribal consultation, is not the end of this fight — it is the new beginning. Expect mass resistance far beyond what Trump has seen so far.
“The granting of this easement goes against protocol, it goes against legal process, it disregards more than 100,000 comments already submitted as part of the not-yet-completed environmental review process — all for the sake of Donald Trump’s billionaire big oil cronies. And, it goes against the treaty rights of the entire Seven Councils Fires of the Sioux Nations.”
Check out the call below and take action!

We are calling for emergency actions all over the world. PLEASE, THIS IS OUR LAST STAND.
Please visit everydayofaction.org to find or register an action wherever you are. Check out our world action map  to join the mass distributed actions TODAY, February 8th.

We encourage groups across the globe to connect our prayers for the water with other fights against fascism and the domination of people and Mother Earth (deportations, muslim ban, attacks on labor, deregulation of wall street, other fossil fuel projects, censorship of the press and academia, etc).
Choose the target that is most strategic for building long-term collaborative resistance in your local area.  Potential targets may include:  city halls, federal buildings, army corps offices, ICE detention centers, banks profiting off DAPL, sheriff’s offices that have come to Standing Rock, labor union offices, sites of workplace struggle, etc.
MESSAGING – please amplify and use the messaging put out here by