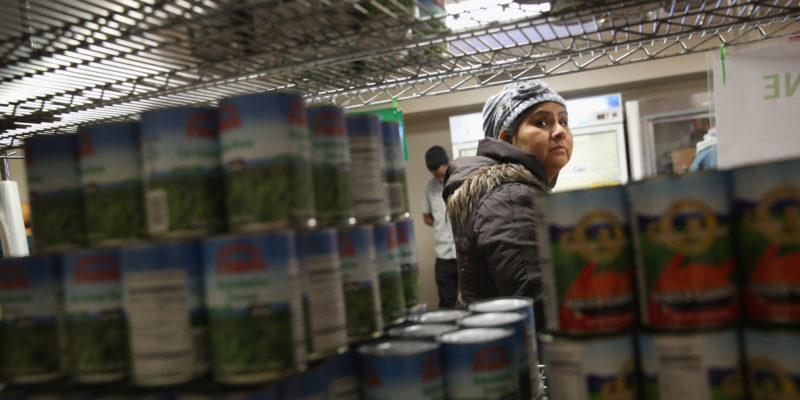 ABOVE:  NEW YORK, NY – DECEMBER 11: A Harlem resident chooses free groceries at the Food Bank For New York City on December 11, 2013 in New York City. The food bank distributes dry, canned and fresh food to needy residents and works with community based member programs to provide some 400,000 free meals per day throughout the city. Need increased in November when 47 million low-income people nationwide saw their food stamps cut as the federal SNAP program expired. (Photo by John Moore/Getty Images)

Wisconsin Governor Scott Walker believes that poor people who receive public assistance should have to undergo drug testing, and he’s taking steps to make sure that happens.

Walker last week charged ahead with a plan to require drug testing for some recipients of Wisconsin’s food stamps program, formally referred to as the Supplemental Nutrition Assistance Program (SNAP), reports The Atlantic. The plan would make Wisconsin the first state in the union to drug test for food stamps, other states that have tried the move have been blocked by the feds.

That comes on top of another plan to test Medicaid enrollees in Wisconsin. Oh, and don’t forget a law already on the books: That one requires drug testing for non-custodial parents getting funds Temporary Assistance for Needy Families.

If Gov. Walker’s proposals pass federal scrutiny, all three of the major welfare programs in Wisconsin will involve drug-testing the recipients. Walker’s move to “overhaul welfare” over the past three years has already included some such “reforms.”

The proposed change to SNAP would affect those who take part in its Employment and Training Program (ETP). Healthy, childless adults already have to meet work requirements to qualify for food stamps through ETP.

Under Gov. Scott’s proposed new rules, those who test positive would be required to undergo drug treatment, or lose their benefits. The state would pay for “drug rehab” for pot smokers who couldn’t afford to pay for it themselves.

While alcohol, amphetamines, cocaine, and barbiturates all clear out of a person’s urine after four days or so, marijuana can linger for 30 days or more. That means any drug testing, by definition, tends to catch more cannabis smokers than any other category of substance user.

Arizona has published figures showing a net savings of just $3,500 for 26 individuals who either tested positive or failed to show up for their drug test appointment. That’s an overall saving of just $135 per person.

According to state data, the seven states with existing programs— Arizona, Kansas, Mississippi, Missouri, Oklahoma, Tennessee, and Utah— are spending hundreds of thousands of dollars to detect very few drug users. The statistics show that welfare applicants actually test positive at a lower rate for drug use than does the general population.

Meanwhile, the states have collectively spent almost $1 million on the effort, with millions more slated to be spent in years to come.

Under the Obama Administration, Gov. Walker’s requests to add drug testing in the SNAP program were denied or delayed by the Agriculture Department because they were seen as an additional barrier to eligibility— one that Wisconsin wasn’t entitled to impose.

While the state denied that, the argument had already been used successfully. The Centers for Medicare and Medicaid Services has also denied requests for waivers from states which wanted to impose drug testing for Medicaid.

Early on, Centers for Medicare and Medicaid Services Administrator Seems Verma signaled the agency would now accept work requirements in Medicaid waivers, like the one being considered in Wisconsin. Verma also announced in November that CMS “will approve proposals that promote community-engagement activities,” typically including work, community service, and job training.

According to Kaiser Health News, healthcare experts expect this move heralds the agency’s support for further conservative reforms impacting aid eligibility such as drug testing. Advocates are concerned the changes are just a way for states to kick millions of poor people off welfare programs, and undermine their mission of providing food assistance and health coverage to the poor.

To amend part A of title IV of the Social Security Act to require States to implement a drug testing program for applicants for and recipients of assistance under the Temporary Assistance for Needy Families program.

IN THE HOUSE OF REPRESENTATIVES

Mr. PEARCE (for himself, Mr. WESTMORELAND, Mr. ROE of Tennessee, Mr. DUNCAN of South Carolina, Mr. DESJARLAIS, Mr. HUIZENGA of Michigan, Mr. POSEY, Mr. KING of Iowa, and Mr. MULVANEY) introduced the following bill; which was referred to the Committee on Ways and Means

To amend part A of title IV of the Social Security Act to require States to implement a drug testing program for applicants for and recipients of assistance under the Temporary Assistance for Needy Families program.

Be it enacted by the Senate and House of Representatives of the United States of America in Congress assembled,

This Act may be cited as the `Putting Drug Free Families First Act of 2011′.

SEC. 2. DRUG TESTING PROGRAM FOR APPLICANTS FOR AND RECIPIENTS OF ASSISTANCE UNDER STATE TANF PROGRAMS.

(a) Requirement That Applicants and Individuals Receiving Assistance Be Tested for Illegal Drug Use- Section 408(a) of the Social Security Act (42 U.S.C. 608(a)) is amended by adding at the end the following:

`(12) REQUIREMENT FOR DRUG TESTING; DENIAL OF ASSISTANCE FOR INDIVIDUALS FOUND TO HAVE USED AN ILLEGAL DRUG-

`(ii) in any other case, before the end of the 3-month period that begins on the date of the enactment of this paragraph.

`(B) DRUGS TO BE INCLUDED IN TESTING-

`(i) IN GENERAL- In conducting drug testing pursuant to subparagraph (A), the State shall test for each of the following:

`(ii) EXCEPTION FOR PRESCRIPTION USE OF DRUGS- A positive test for a drug listed in clause (i) shall be disregarded for purposes of this paragraph if such drug was used pursuant to a valid prescription or as otherwise authorized by law.

`(I) a 1-year (or, if the individual has so tested positive for the 2nd time, 3-year) period has elapsed since the results of the test were determined; and

`(II) the individual tests negative for the use of each drug listed in subparagraph (B)(i) at the end of such period.

`(ii) PERMANENT INELIGIBILITY AFTER THIRD POSITIVE TEST RESULT- If an individual tests positive pursuant to subparagraph (A) for the third time for the use of any drug listed in subparagraph (B)(i), the State shall treat such individual as permanently ineligible for assistance under the State program funded under this part.

`(D) REHABILITATION EXCEPTION AFTER FIRST POSITIVE TEST RESULT- In the case of an individual who tests positive pursuant to subparagraph (A) for the first time for the use of any drug listed in subparagraph (B)(i), the period for which assistance may not be provided to an individual by reason of subparagraph (C)(i) shall be 180 days if the State determines that the individual–

`(i) has successfully completed a drug rehabilitation or treatment program for the drug for which the individual tested positive; and

`(ii) tests negative for the use of such drug at the end of such 180-day period.

`(F) DESIGNEE FOR CHILD BENEFICIARY- In the case of a parent of a minor child, if such parent tests positive pursuant to subparagraph (A) for the use of any drug listed in subparagraph (B)(i), the State shall designate an individual other than such parent to receive payments for assistance under the State program funded under this part on behalf of the minor child. The State may not so designate an individual unless the individual has been tested for the use of each drug listed in subparagraph (B)(i) and did not test positive.

`(i) has been determined by the State to provide rehabilitation or treatment for the use of an illegal drug; and

`(ii) complies with all applicable Federal, State, and local laws and regulations.’.

(b) Penalty for Failure To Implement Illegal Drug Use Testing Program- Section 409(a) of the Social Security Act (42 U.S.C. 609(a)) is amended by adding at the end the following:

(c) Effective Date- The amendments made by this section shall take effect on the 1st day of the 1st calendar quarter that begins on or after the date that is 1 year after the date of the enactment of this Act.

Stay Connected with the Library All ways to connect »

Mom Can’t Get Food Stamps After Drug Offense, Resorts to Prostitution to Feed her Kids

If she’d committed murder, Carla could have gotten assistance to feed her children. But because the crime she committed was related to drugs, she can’t.

Carla walked into my office with despair in her eyes. I was surprised. Carla has been doing well in her four months out of prison; she got off drugs, regained custody of her kids, and even enrolled in a local community college.

Without much prodding she admitted to me that she had retuned to prostitution: “I am putting myself at risk for HIV to get my kids a f—ing happy meal.”

Despite looking high and low for a job, Carla explained, she was still unemployed. Most entry-level jobs felt out of reach with her drug record, but what’s worse, even the state wasn’t willing to throw her a temporary life preserver.

You see, Carla is from one of the 32 states in the country that ban anyone convicted of a drug felony from collecting food stamps. With the release of the Global Burden of Disease Study last week, it bears looking at how we are perpetuating burdens among the most vulnerable Americans with our outdated laws.

If she’d committed rape or murder, Carla could have gotten assistance to feed herself and her children, but because the crime she committed was a drug felony, Carla joined the hundreds of thousands of drug felons who are not eligible.

The 1996 passage of the Welfare Reform Act was supposedly implemented to prevent drug addicts from selling their food stamps for drugs. But that concern is virtually unwarranted today. Unlike old food-stamp coupons, today’s food stamps are distributed electronically, which makes selling or trading them quite difficult.

Denying food stamp benefits to people convicted of drug offenses is an excessive and ineffective crime control strategy. The policy increases an individual’s risk of returning to prison by making it more difficult for people to survive after they get out, slowing or possibly even preventing their reintegration into society. People without the financial cushion necessary to get through the initial period of job searching and re-establishing a life have little choice but to turn to illegal means to make ends meet.

What’s more, the food-stamp ban is a law that works against good public health policy. As a doctor who cares predominantly for people who are released from prison, I see the damaging consequences of this ban on food stamps. I have seen patients of mine with diabetes go without food and end up hospitalized with low blood sugar, and still others with HIV skip their antiretrovirals because they don’t have food to take with their pills.  Not having access to food is associated with bad health outcomes including worsening diabetes, HIV, depression. Young children face anemia, diabetes, and depression.

Women with children are especially affected. It’s estimated that 70,000 women and their children are banned from obtaining food stamps. This means mothers who are simply trying to feed themselves and their children, and who are trying to get back on their feet after serving their time, are banned from receiving the money to pay for the basics necessary to survive.  Meanwhile, 46 million others, including college graduates and PhDs with far more resources, can receive food aid.

No other criminal conviction results in such a ban—not arson, not rape, not even murder.

Carla was arrested at 20 for selling marijuana.  At the time, she had also been making money working for her “boyfriend” as a sex worker.  Her boyfriend was also arrested for robbery.  He could qualify for food stamps upon release. But not Carla. She continues to pay for selling marijuana— a drug which two states have now voted to legalize outright—and the price is health risks for herself and for her children.