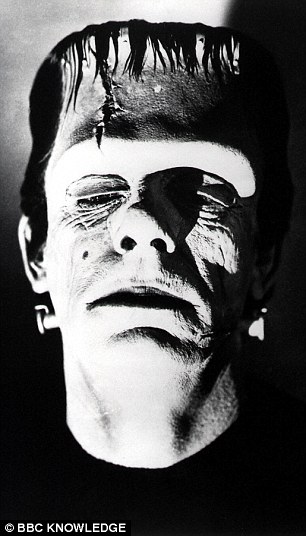 Can you grow a brain in a jar? Scientists claim they’ve done just that. And the implication could not be more chilling

By John Nash For The Daily Mail

This is the stuff of Frankenstein nightmares. Imagine yourself as a functioning brain kept in a laboratory jar. White-coated scientists are torturing you by feeding an endless stream of terrifying images and sensations into your nervous system.

Even if you could cry out for help — no one could legally come to your rescue.

For years, philosophers have pondered the ethics of conducting such Nazi-style experiments, as a theoretical basis for moral arguments. But this issue is no longer theoretical. The age of a human brain in a jar is fast becoming reality.

This week, American biologists announced that they had crossed a critical threshold in the science of growing a human brain and keeping it alive in a laboratory.

Rene Anand, a professor of biological chemistry and pharmacology at Ohio State University, astonished military experts by announcing that his team has successfully grown a near-exact replica of a five-week-old foetus’s brain.

It is only about the size of a pencil rubber. But it contains 99 pc of the cells that would exist in the brain of a human foetus, making it the most fully formed brain ‘model’ ever engineered.

It even has its own spinal cord and the beginnings of an eye, Professor Anand told the 2015 Military Health System Research Symposium in Fort Lauderdale, Florida.

He has engineered the brain using stem-cell technology, which involved turning adult skin cells into stem cells which are capable of growing into any type of body tissue. It is a breakthrough that paves the way to cloning human brains.

The work is not finished. Prof Anand now plans to continue growing his lab brain until it resembles that of a 12-week-old fetus.

by National Nullification of Unconstitutional Federal Actions on Saturday, April 14, 2012 at 3:51pm ·

The parallels between Hitler’s NAZI Germany and the fall of the Wiemar Republic and Barack Hussein Obama’s Fundamental Change of America are too eerie to ignore. The economics and politics of then and now are scary. Oh the players are different (sort of) but the Rhetoric and the economics are pretty much the same. The plan to collapse the American economy by increasing energy prices; decreasing employment; explode an already out-of-control tax spending congress with distribution of wealth schemes disguised as “stimulus” both domestically and abroad; oppressive regulations and legislation lead by Obamacare as the crown jewel of a totalitarian infrastructure created to replace a Constitutional structure. The Obama totalitarian czars replaced the constitutional process of checks and balances with these 50 or so strange and radical behind the scenes individuals writing burdensome and oppressive regulations designed to suffocate the economy. All under being done under the umbrella of “Fundamentally Changing America!” Does not something need to be removed or destroyed before it can be replaced with another thing?

The Obama administration are the point men for ending America as we know it. Though George Soros is a key financier for orchestrating the collapse of the American economic system, even he is but the tip of the iceberg. The true irony is the American Taxpayer is funding the overthrow of our Constitutional system of government. The money Soros and all the other so-called tax exempt entities are siphoning tax dollars into this radical coup d’état. When a majority of the world’s population are Communists, Socialists and other forms of Totalitarianism, why do so many in this country deny they are here in America and very much in control of local, state and federal governments?

I live in East Texas and the local government here is as liberal and socialist as it gets. Texas of all places! Texas has a super majority of RINO Republicans who have passed radical left wing agendas where even the courts has to step in with the illegal gerrymandering of political districts. Anyway, the taxpayers are funding George Soros, Union thugs and literally thousands of tax-free organizations backing the radical left spearheaded by the Obama administration. Is any listening to this madman? He’s dividing America by spinning class warfare against the Rich and political warfare against the TEA Party Patriots. The Unions are being armed for violence against American citizens who align themselves with the TEA Party movement for which they will be blamed for. The NAZI playbook suits the democrats nicely for just as Hitler blamed the Jews living in the Wiemar Republic of Germany so goes the Obama regime’s attacks against the wealthy and the TEA Party movement. While the collapse of Germany was not orchestrated, the collapse of America is. I know these are words that are hard to hear, but an HONEST examination of the facts can only come to one conclusion, America is Under Siege by radical left wing socialists and communists!

The willing players of the fundamental transformation of America will spin their way into oblivion proclaiming every mindless excuse imaginable (and even those unimaginable) to hide their reality from those suffering from the Titanic Effect. The Titanic Effect goes like this: the greater the enormity of the disaster, the less likely people will be to acknowledge its reality. It manifests with some being more concerned with arranging the lounge chairs on the promenade deck while denying the ship is sinking. (Sigh) Let the Band Play On.

Hitler’s Jews are Obama’s Rich; The Hitler Storm Troopers are now the Obama Union Thugs; The NAZI propaganda machine of Yosef Goebbels is nothing compared to the media machine willing and eager to see the greatness of America slip into oblivion. Even Fox Cable and Fox Business can no longer be trusted to carry the mantel for truth and investigative reporting. This cause for restoration, truth and American values lost a great champion and Patriot when Andrew Breitbart died last month. He will not easily be replaced and is already sorely missed.

The transformational surge began in earnest with the emergence of the Perfect Storm in 2008: A statist-progressive led filibuster-proof Senate; a super-majority of extreme leftists in the House of Representatives; with an angry, anti-American, Statist-Progressive President set the stage for the checkmate of America. It began with transforming an economic recession into a global catastrophe that began the devaluation of the dollar by flooding foreign and some US capital markets with trillions (yes, trillions) of dollars. A level 3 crisis morphed into a global level 10 economic meltdown overnight. This happening during the lame-duck Bush Presidency was no mishap … who better to blame?

Congress worked at a feverish pace to enact a surge of laws and regulations for a new communist style infrastructure guaranteed to prolong our economic woe. After all, there’s still George Bush to blame. What Congress put in place during the first term of Obama is the death knell of America. The poison is now flowing through he veins. Even if the Supreme Court decides the healthcare mandate to be unconstitutional, my greatest fear is it will dampen the urgency and mandate to repeal healthcare and all other Obama laws and regulations passed. That is the structure that will rise from the ashes created when the constitutional structure collapses under its own weight. The enormity of the damage to this nation during that first term is unconscionable!

It must all come down unless you are quite comfortable with totalitarian rule emerging from the ashes of what was one the Greatness of America. The evil of cap-n-trade, the tyrannical anti-gun laws, porous borders, the murdering of our future via abortion, and the rest are all critical pieces of the emergence of the new order. We now sit upon the precipice of disaster … and yet half this nation still supports Barack Hussein Obama for a second term?

Will this nation go placidly into destruction like the Jews of NAZI Germany did?

Not on my watch! Its time to rise again fellow patriots. We will not silently walk into the darkness nor shall we go placidly into the midst of destruction. Rise Up! … Speak Up! … and cast your Ballot this November. The very survival of our Nation depends upon you.