Specialty brokers looking to get insurers hooked on emerging industry

The legal marijuana industry in the United States is experiencing tremendous growth.

Legal cannabis markets in the United States are expected to grow 700 percent over the next five years, according to an industry report titled, “The State of Legal Marijuana Markets 2nd Edition,” published by The ArcView Group.

The report values the U.S. legal marijuana market, which comprises all states that have active and open sales of cannabis to people legally allowed to possess it under state law, at $1.53 billion. The national market is projected to grow 68 percent to $2.57 billion by the end of 2014.

The five-year national market potential is $10.2 billion, according to ArcView. Gains will stem from increased demand in existing state markets, as well as from new state markets coming online within a five-year horizon.

As individual states try to determine where they stand on the legalization of medical and recreational marijuana use, insurers are also evaluating this segment and what coverages – if any – they are prepared to offer to the businesses selling and growing medical or recreational cannabis products.

Those who specialize in this class say agents and brokers shouldn’t be deterred by the stigma that goes along with it; instead they should learn about the segment’s needs so they can take advantage of growing business opportunities.

The legalization of marijuana for recreational use in both Colorado and Washington has led to a slew of new business ventures in both states. The Associated Press reported in December 2013 that the state of Washington received nearly 1,700 business applications between when the license application window opened on Nov. 13, 2013, and mid-December for those looking to grow, process or sell cannabis under the new recreational marijuana law.

Marijuana sales in Colorado totaled $15.3 million for the first five months of the year, according to the Colorado Department of Revenue, and the Denver Post reported the state has seen record tourism numbers so far in 2014.

Whether they are a grower, dispensary owner, supplier or processor, marijuana entities looking to sell to the public are now businesses that need insurance, says Ed Kuhn, president of Creative Edge Nutrition (CEN) and the newly formed Wellness Medical Protection Group/Liability Insurance Solutions.

“These business owners need help figuring out issues like: Where can I set up a dispensary? What are the state regulations? What is my workers’ comp liability? And what are the liabilities that other businesses have like theft, fire, business interruption, etc. They have unique issues and those need to be seen and be addressed,” he says. “They have a lot of investment dollars going into this industry and they are concerned about what happens to their investment dollars if they are shut down or don’t obey state regulations.”

There is also opportunity for agents beyond the marijuana-related businesses themselves because they work with vendors that welcome the expertise an agent that specializes in the marijuana industry can offer, says Mike Aberle, vice president of sales and marketing for Next Wave Insurance Services, the program administrator for the marijuana-focused entity MMD Insurance.

“It is a brilliant marketing campaign. Most of these people also have businesses outside cannabis and they made money before this,” says Aberle. “The agent, by promoting that they do this segment, can also get other policies from those working with the [marijuana entity] but have nothing to do with cannabis except for how they work with the operations.”

Aberle says MMD’s core program started with indoor/outdoor cultivators and retailers and has since grown to cover the businesses that work with them like construction, security and supply companies.

“These ancillary businesses can help you feed your company based on a single classification, which is cannabis. And if you are an agency that relies on referrals, then hopefully those people will turn around and refer you to other industry business owners too,” he says.

Cannarisk, a division of BIM Agency, a Washington-based construction insurance brokerage, is the result of agent Matt Gunther’s figuring that as the marijuana industry became more accepted, the businesses that sell products would need insurance.

“I am 36 years old and I felt like insurance was an old man’s game, particularly on the commercial side. I realized as recreational goes legitimate, just like in construction, it will be required to have insurance,” says Gunther. “This is unprecedented and unchartered territory and nobody knows what the risks are ahead of us. It makes sense for state and local governments to require liability insurance to protect the public.”

Cannarisk launched in Washington state in early 2014 around the time producers, growers and retailers were getting licensed. It is focused on serving medical and recreational marijuana-related businesses in the state. Gunther says being located in the state has proven to be a big advantage.

“We are trying to establish ourselves as a local face that understands the business and provides the needed services. We also provide additional value because we can be a wholesale access point for retail agents too,” he says.

Recreational growers, however, are required to disclose their growing locations by Washington state law, which Gunther says his agency has been able to use to its advantage.

“We can convey to the growers that their locations are public information and people know where you are growing your product. Now you really have an exposure,” he says.

Creative Edge Nutrition sees opportunity on the medical side. The health, wellness and alternative treatments company entered into a joint venture with RXNB Inc. in June to offer marijuana liability insurance in North America through The Wellness Medical Protection Group (WMPG).

Kuhn heads the new venture, which offers medicinal marijuana coverage for the grow and harvest of product, extracts, facilities, landlords, dispensaries and the medicinal prescriber. Coverage is available through Lloyd’s of London. He says WMPG’s coverage is available through its CANNAPROTECT program for all medical marijuana-related areas, including anti-aging and aesthetic treatments, cash-based practices, and alternative treatment facilities.

WMPG will be mainly focused on medical cannabis practices but will also cover recreational facilities in Washington and Colorado.

“We think there will always be two segments of the market – the prescription-quality marijuana that is only available through the medical side, and recreational that isn’t used for ailments,” says Kuhn.

Not surprisingly, Kuhn says insurance markets are currently more comfortable with covering the medical side because it is a more established industry with more controls in place. He says he has heard from carriers that will not work with recreational facilities at this time.

“Carriers are spooked by the lack of a federal position and if they have big limits exposed and something happens in Washington or Colorado, it could be huge for them,” he says. “Markets feel more comfortable with medical marijuana because it is dispensed through a physician.”

Cannarisk’s Gunther says he didn’t expect there to be much competition from other agencies because of the exposures, which has so far turned out to be true. He says the reaction from the rest of the industry toward this segment – particularly carriers – has been skeptical and prudent. He said they are working with a “limited number of carriers,” with three main ones really willing to insure the risk.

“There are a few on the outskirts looking in. They are being very cautious, as they should be, because how do you measure the risk?” he says. “But these [business owners] are professionals. There is a misconception from people in other states that these are all stoners starting a business, and that is not the case at all. These are professionals who are extremely educated and they are opening up with the desire to work with a local broker.”

MMD’s Aberle says it is customary for states to start with legalizing medical marijuana before they will look at the recreational side. These frequent changes and unknowns in the industry are a put-off to carriers, he says. Lloyd’s has been the only carrier Aberle has found that will be flexible in adjusting the coverage and limit options on a needed basis.

“If I were to request as many changes as I have made in a given year with another carrier, they would have dropped the program. This industry has so many changes and needs all the time that you have to be consistently moving forward,” he says.

MMD has also received requests from states, counties, cities, and policy departments for its loss guidelines and has lent its expertise to answer questions about the role insurance will play in the development of a legitimate marijuana industry. As state government or regulatory agencies set certain insurance standards, Aberle says the industry will play a big part. However, carriers’ leeriness in offering the required limits or coverages can make it difficult for the marijuana industry to move forward.

“We will continue to work with these people to help carve out a proper industry. … We have had to do a lot of work in the insurance industry and show a lot of data to say this is a viable business and you will be profitable writing,” he says. “We have also had to work with cities and states to show them that certain insurance options are just not available because there is no carrier willing to do it.”

Products completed or products liability coverage is an area that makes carriers nervous, says Aberle, and it is also a coverage that is required of all recreational operations in both Washington and Colorado. 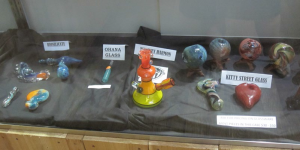 Aberle is encouraged by the movement he’s seen from other carriers that haven’t written this class in the past, but for now they are mostly “window shopping.”

“They want to know about it because it sounds cool and the industry loves to talk about it and know more and that’s a great thing,” he says. “For us, it is has gone from ‘can we even mention we are writing it?’ to ‘we love telling everyone about it.’ The carriers still won’t write the business, but they love hearing about it.”

Editor’s Note: The marijuana products and facilities in this article were photographed at Top Shelf Cannabis in Bellingham, Wash.

O’Connor is associate editor of MyNewMarkets.com.