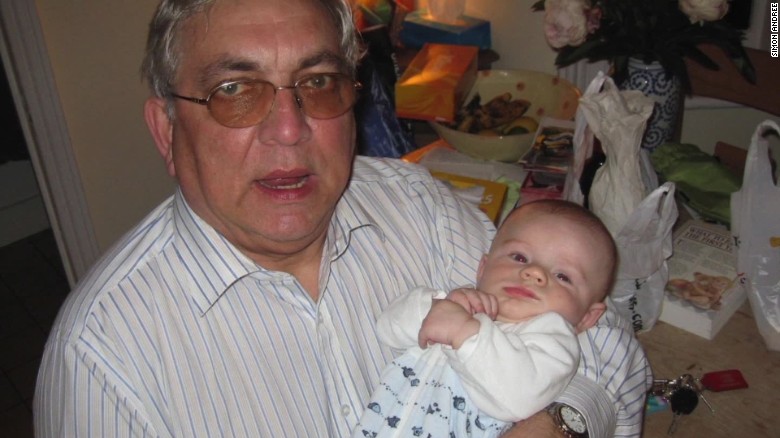 (CNN)The crime is related to homemade wine. But can 74-year-old Karl Andree survive the punishment — 360 lashes by Saudi authorities?

His son fears that he won’t, conceding that while Andree may have done wrong in the eyes of Saudi officials, it shouldn’t warrant what may amount to a death sentence.

"I completely understand that he has committed a crime and, for that, you have to face consequences … He understands as well," Simon Andree told CNN. "But … on the basis of his ill health, (I hope) he can get clemency and get released, because I feel he won’t survive those lashes."

Alcohol — like narcotics, weapons, pork and pornography — are prohibited in Saudi Arabia, in line with the Middle Eastern nation’s strict Wahhabi interpretation of Islam. And it’s what got Karl Andree in trouble, for transporting homemade wine in his car.

The British grandfather has since spent more than a year in custody.

Simon Andree acknowledges the Saudi law in this case. But he also appealed for authorities there to take into account his father’s physical condition.

The Andree family got support Tuesday from British Prime Minister David Cameron, whose office signaled Tuesday that he will reach out to Saudi officials.

"Given the ongoing concerns and the fact we would like to see more progress, the PM is writing today to the Saudis to further raise the case on the back of the action that has already been taken by the Foreign Office," a spokesperson for Cameron’s office said.

In another development, UK Secretary of Justice Michael Gove announced Tuesday that his government would withdraw its $9 million (£5.9 million) for training related to the Saudi penal system. The contract was submitted by the commercial arm of the British Ministry of Justice in August 2014, the same month Andree was arrested.

Yet a spokesperson for the Foreign Office did say that diplomats have been involved in his case for some time, including "regular visits to check on his welfare, and frequent contact with his lawyer and family."

"Ministers and senior officials have raised Mr. Andree’s case with the Saudi government," the spokesperson said. "And we are actively seeking his release as soon as possible."

CNN’s Simon Cullen and Alex Felton contributed to this report.

SEATTLE, Washington (KING) – It’s a different kind of head shop found just down the stairs from the Pike Place market.

“The pig farmer has been feeding them marijuana for the last two and a half months of their life and they’ve been happy as hell,” said William Von Schneidau, owner of the butcher shop.

This is all thanks the voters of Washington who legalized marijuana in the last election. That’s when Von Schneidau saw the opportunity wasn’t just blowing smoke.

“And then all of a sudden marijuana, you know, became legal a few months ago and somehow, I don’t know how, I met the commercial growers and they needed to get rid of some of their stuff. So rather than going into the compost pile we said, ‘Lets try it out.’ So here we go,” said he said.

The pigs are raised in a farm about an hour outside of Seattle. In fact, these pigs are on the rock star diet. The mix contains drugs and alcohol, the booze coming by way of the spent grains from Woodinville’s Project V Vodka.

The pot pigs grow to be extra fat and really happy according to the farmer who wants to be anonymous.

Here’s the tough part of the story. The pigs love eating weed, and what gives me pleasure is BBQ pork.

So I brought some pot pork belly to my buddy Steve Freeman at Celtic Cowboy BBQ in Edmonds. And we decided to smoke it.

Steve rubbed the belly, which is basically the part that bacon comes from, with spices and tossed it into the smoker for about 45 minuets. He then seared it on a skillet.

Steve says the results are stunning.

“That’s some pretty happy pork right there. He’s done a good job with that. I really like that,” he said.

And that takes us back to the happiest farm in Washington. Yes, the pigs will become BBQ one day.

But if you gotta go, why not go out on a high.