Congress took a step toward easing its stance on medical marijuana on Thursday.

The Compassionate Access, Research Expansion and Respect States, or CARERS, Act would effectively change the Controlled Substances Act, allowing the possession, production and distribution of medical marijuana in states with established marijuana laws.

Twenty-nine states, as well as the District of Columbia, have already legalized marijuana, but the CARERS Act would prevent the federal government from prosecuting businesses and individuals in states where medical marijuana is legal, since federally marijuana is still illegal under the Controlled Substances Act.

“The reintroduction of the CARERS Act is the first of many steps we hope this Congress will take to end the federal prohibition of medical marijuana,” Don Murphy, director of conservative outreach for the Marijuana Policy Project, said in a statement. “Polls show overwhelmingly strong support for medical marijuana, and it spans the political spectrum.

“The federal government should not be meddling in state laws that allow it or obstructing research into its many medical benefits.”

The introduction of the bill comes days after news that Attorney General Jeff Sessions wrote a letter to leaders of Congress asking that they undo protections for the industry under the Hinchey-Rohrabacher Amendment. That amendment, which is tied to the federal appropriations bill, prevents the Justice Department from using federal funds to enforce federal prohibition in states with legal marijuana laws.

Don’t miss: The marijuana industry could be worth $50 billion annually by 2026

The act, which was first introduced in 2015, would also allow doctors to recommend medical marijuana to veterans in states where its legal and it would give researchers more access to cannabis to conduct studies, which has been an issue in the industry.

Marijuana is made up of a multitude of cannabinoids — the two most prominent being tetrahydrocannabinol (THC) and cannabidiol (CBD). While THC is the main psychoactive component, researchers believe CBD has potential medical uses. The CARERS Act would remove CBD from the Drug Enforcement Administration’s list of Schedule I drugs, according to Leafly, which would allow states to import it. 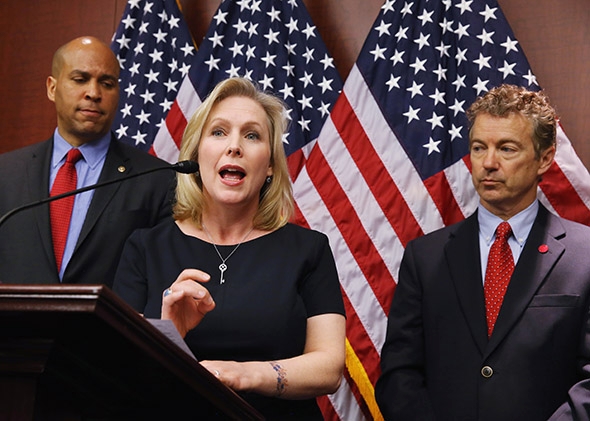 A trio of high-profile senators this week unveiled a package of drug reforms that would effectively end the federal war on medical marijuana once and for all. The bill, from Republican Rand Paul and Democrats Cory Booker and Kirsten Gillibrand, wouldn’t legalize medical weed across the country, but it would remove the threat of federal prosecution for patients who use it in states where it is legal. It would also represent a federal acknowledgment of weed’s medicinal potential—something the U.S. government has repeatedly refused to concede since Richard Nixon launched the war on drugs in the 1970s.

Josh Voorhees is a Slate senior writer. He lives in Iowa City.

The legislation is bipartisan, sound, and long overdue. Frustratingly albeit unsurprisingly, then, it is unlikely to make it very far in the current Congress, a reality even the nation’s chief weed advocates have readily admitted. Its short-term fate notwithstanding, though, the bill is a clear sign of just how quickly the drug debate is evolving in Washington—and may just foretell how nationwide legalization will eventually come to pass.

That Paul, Booker, and Gillibrand have teamed up on the bill is telling, and the good news for the pro-pot crowd comes in both the chicken-and-egg variety. On the one hand, as rising stars on the national stage, all three will have ample opportunity to further their cause—particularly Paul, who is expected to officially jump into the race for the GOP presidential nomination later this year. On the other, it’s unlikely that the trio would have made this a priority if they were the least bit nervous that their efforts would come back to bite them. And they have good reason to be confident in that regard: A majority of Americans back full-scale marijuana legalization, and even those who don’t tend to believe that it’s simply a matter of when, not if, the nation’s eight-decade-long prohibition of pot comes to an end.

Still, believing legalization is inevitable doesn’t make it so. The question, then, is how we get from the present—with Congress bullying Washington, D.C., officials in a bid to stop them from following the will of voters and making weed legal—to full, nationwide legalization?

The Senate legislation offers just such a road map. The bill’s most important provision would change how pot is classified under the Controlled Substances Act, the 1970 law that is the backbone of federal drug policy. Currently, the government labels marijuana a Schedule I drug, a classification that puts it in the same category as heroin, LSD, ecstasy, and a handful of other heavyweights. Those drugs, according to the federal definition, have “no currently accepted medical use and a high potential for abuse.” The Senate bill would drop weed to Schedule II, a classification for drugs that still have a significant potential for abuse, although less than their more restricted brethren. More importantly, the Schedule II classification is reserved for drugs with some medical benefits—things like methadone and Adderall—meaning placing pot in that category would be a de facto admission that weed does indeed have a role to play for some patients.

The path from legal medical weed to the recreational stuff isn’t as straight of a line, although the two are clearly connected.

It’s hard to overstate just how much that would change the way the federal government deals with pot. It would open the door wider for universities to research medical uses for marijuana without fear that Drug Enforcement Administration agents are seconds away from kicking down their doors, while also giving the green light to doctors at Veterans Affairs hospitals to prescribe medical marijuana to veterans. In many ways, the reclassification would represent the biggest change in the government’s attitude toward pot since Nixon decided that weed was what was fueling his counterculture critics. (Or, as he famously put it, “They’re all on drugs.”)

To date, 23 states, along with the District of Columbia, have legalized medical marijuana, siding with the medical consensus that cancer patients and others can benefit from marijuana use and against the federal ban that has always been more about politics than science. (Another 12 states, meanwhile, have legalized the limited use of low-THC, high-CBD pot for those with prescriptions.) A change in classification would be the first major domino to fall in the fight to end federal prohibition. Not only would it allow medical marijuana to more easily flourish in those states where it is already legal, it would also make other states where medical weed is not yet legal more likely to follow suit.

Medical marijuana is legal in 23 states, but the drug remains illegal under federal law. Imagine a retired grandmother who is suffering terribly with a serious illness. Her doctor believes that marijuana might help. Her neighbors don’t mind if she fills a pot prescription: They overwhelmingly voted to give her that right. Sure enough, the woman finds that smoking weed lessens her suffering. Should the federal government be empowered to arrest her for consuming it?

Many in Congress think so. And while federal agents are unlikely to intervene in this sort of case because the optics would be so awful, the law allows for it.

But Senator Rand Paul, a Republican, and his Democratic colleagues, Senators Cory Booker and Kirsten Gillibrand, hope a legislative majority will endorse a less-callous approach. Tuesday, they are introducing a bipartisan bill that would "allow patients, doctors and businesses in states that have already passed medical-marijuana laws to participate in those programs without fear of federal prosecution."

Exaggerated notions of the harmfulness of marijuana cannot survive in a society where cancer patients consume it.

The bill is expected to divide Republicans. Senator Paul, his colleague Ted Cruz, and Governor Rick Perry, among others, have some regard for the 10th Amendment, which states that "the powers not delegated to the United States by the Constitution, nor prohibited by it to the states, are reserved to the states respectively, or to the people." They also believe that states can act as laboratories of democracy: People in different regions can live under a system of their liking while acting as a model for other Americans as they weigh the best approach.

Other Republicans want the federal government to override the will of the people in various states. They argue that many people who get medical marijuana cards don’t really need the drug—it’s hardly unique among prescription medications in that sense—and they fear that the availability of medical marijuana will lead to full legalization, as it has in states including Colorado, Washington, and Oregon. They’re right to think so. Exaggerated notions of the harmfulness of marijuana cannot survive in a society where cancer patients consume it. And as exaggerated worries fade, support for prohibition plummets.

That isn’t because marijuana is harmless. Regular use is bad for one’s health. Some users become psychologically addicted. Long-term use carries unknown risks. There are prohibitionists who have a very clear understanding of the drug’s costs and benefits, and continue to staunchly oppose legalization of any kind. But most people who see the costs and benefits of marijuana clearly conclude that preventing other Americans from smoking it at the point of a gun is deeply immoral. Most people are unwilling to send SWAT teams into family homes, lock humans in cages, and enrich drug cartels all in the hopes that a War on Drugs that has failed for decades will improbably turn out to be successful in the end.

Tom Angell of Marijuana Majority, an advocacy group, sees this latest bill as evidence that popular opinion is influencing politicians. "The fact that two young Democrats with likely long political futures have teamed up with a probable 2016 Republican presidential candidate shows how medical marijuana is a nonpartisan, noncontroversial issue that draws support from across the spectrum," he wrote.

Roughly half of Americans now favor outright legalization of recreational marijuana. The day isn’t far off when public opinion will have shifted enough to bring about a bill to that effect at the national level. That various states are experimenting with medicinal and recreational marijuana leaves us better prepared for that moment. Enabling those experiments is a step in a responsible direction.