Unions have caught a whiff of a rare opportunity to organize a whole new set of workers as recreational marijuana becomes legal in California.

The United Farm Workers, Teamsters and United Food and Commercial Workers are looking to unionize the tens of thousands of potential workers involved in the legal weed game, from planters to rollers to sellers. The move could provide a boost to organized labor’s lagging membership — if infighting doesn’t get in the way.

The United Farm Workers, co-founded by iconic labor leader Cesar Chavez, says that organizing an industry rooted in agriculture is a natural fit, and that growers could label their products with the union’s logo as a marketing strategy.

“If you’re a cannabis worker, the UFW wants to talk with you,” national Vice President Armando Elenes said.

But United Food and Commercial Workers, which represents grocery store employees, meat packers and retail workers, registered its intent to organize cannabis workers across the country.

“We would hope they respect our jurisdiction,” UFCW spokesman Jeff Ferro said.

Teamsters organizer Kristin Heidelbach said there’s no need for unions to battle each other. There will be plenty of workers needing representation as small cannabis businesses run by “happy stoner” types give way to large pharmaceutical corporations, she said.

The green rush that begins in 2018 is an opportunity for unions to regain influence that began declining in the late 1950s, said David Zonderman, a professor of labor history at North Carolina State University. But discord between unions could upend it, as could resistance from cannabis business leaders. 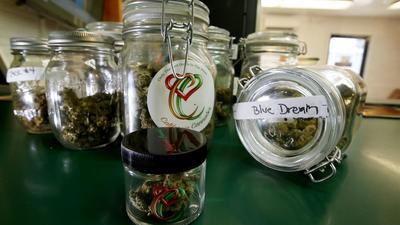 “Are they going to be new age and cool with it,” Zonderman said, “or like other businesspeople, say, ‘Heck, no. We’re going to fight them tooth and nail’?”

Cannabis in California already is a $22-billion industry, including medical marijuana and a black market that accounts for most of that total, according to UC Davis agriculture economist Philip Martin. Medical marijuana has been legal since 1996, when California was the first state to approve such a law.

Labor leaders estimate recreational pot in California could employ at least 100,000 workers from the north coast to the Sierra Nevada foothills and the San Joaquin Valley, harvesting and trimming the plants, extracting ingredients to put in liquids and edibles, and driving it to stores and front doors.

Pot workers have organized in other states, but California should be especially friendly territory for unions, said Jamie Schau, a senior analyst with Brightfield Group, which does marketing analysis on the marijuana industry.

The state has one of the nation’s highest minimum wages and the largest number of unionized workers across industries. Its laws also tend to favor employees.

At least some workers say they’re open to unionizing.

“I’m always down to listen to what could be a good deal for me and my family,” said Thomas Grier, 44, standing behind the counter at Canna Can Help Inc., a dispensary in the Central Valley community of Goshen.

The dispensary — with $7 million in yearly sales — sells medical marijuana.

Called a “bud tender,” Grier recently waited on a steady flow of regular customers walking through the door to pick out their favorite strains.

He said that so far, no unions have contacted him. Grier gets along with his boss and said he doesn’t want to pay union dues for help ironing out workplace disputes. But he hasn’t discounted the possibility of joining.

After recently entering the marijuana industry, Los Angeles resident Richard Rodriguez said one sticky traffic stop three months ago converted him into a “hard core” Teamster. He’d never been in a union until this year.

Rodriguez said an officer pulled him over while he was delivering a legal shipment of pot. He was accused of following too closely behind a semi-truck and was detained for 12 hours, he said.

A union lawyer stepped in, and Rodriguez said he was released without being arrested or given a ticket.

“Most companies can’t or are unwilling to do that,” he said, “because employees are easily replaced.”